HBO has phenomenal programming. Lifelong fan here. They’ve done it again with another fantastically amazing documentary about womanhood. On the surface, Jane Fonda in Five Acts is a video autobiography. But Jane Fonda is so deeply vulnerable with her sharing that she actually speaks to the female experience the world over. On deeper levels the documentary is like a study of the stages of womanhood, femininity and self-discovery.

I have never been married, but the things Jane navigated within herself through her marital relationships resonate with me because I have learned similar lessons in different types of relationship interactions. Her message is so universal and so plainly delivered, it makes Jane Fonda in Five Acts a film of profound beauty and depth.

Act 1: Henry
Any healthy country, like any healthy individual, should be in perpetual revolution, perpetual change.

You have to have the courage to speak about the changes that are needed. And that includes challenging, at the root, the corporate power that has taken over the economy of this country.

We looked like the American Dream. Rich. Beautiful. Close. But a lot of it was simply myth.

A lot of other people were defining me, all of them men. I never felt real. I thought, I just have to get out from under my fathers shadow. Maybe if I go to France and join the New Wave, I will find I really am. I was always in search of somebody who was real in there [in me].

Act 2: Vadim
Here I was, trying to not be defined by men, ended up with a man who was the ultimate definer of femininity. That’s where I was at that time. I wanted someone to mold me. I wanted him to help me become a woman.

I felt like I was a bad mother and I was terrified. It surprised me this feeling of fear. Later on when I looked back on it, I understand.

I always saw my mother as a victim. Women=victim. I am a woman. I am damaged. I am going to be crushed.

My mother was a very complicated woman. A very damaged woman.

I heard my father say things about my body that has twisted my life ever since.

I had suffered from an eating disorder for a long time. Nobody knew. The thing about bulimia is is that it’s a disease of denial. It takes a lot subterfuge. You’re very tired. You’re very angry. And You’re very self-hating. And I realized, I’m heading to a really dark place. I’m either going to head into the light, or I’m gonna succumb to the dark. And it’s a life or death thing. I went cold turkey. It was really really hard. There was something about taking control of my body in that way that got me over the addition. It changed my perception of myself. It was a revolution for me. Though completely unintentional.

He thought I was superficial. That I wasn’t smart enough. But I was producing my own movies. The kind of movies that say the things that I think needed saying.

He fell in love with somebody. And I found out. It did knock the foundation from under me because I could never imagine life without Tom. If I’m not with Tom Haden, then I’m nobody.

I learned a lot with all the men in my life, but learned the most with Ted. His vision is macro and I’m micro, so we were a great partnership.

We had a wonderful ten years, but I had to hide a part of me in order to please him.

Ted couldn’t be alone. So my whole life was about him.

As we moved through the decade we spent together, I became more of a feminist. And so my focus was more on women’s empowerment. But it’s hard to be a complete feminist when you’re in a marriage that doesn’t quite work. None of my marriages were democratic, because I was too worried about pleasing. I had to be a certain way in order for them to love me. I had to look a certain way. And I looked different for all of them. I wanted to be living as a whole Jane. A fully realized Jane.

When you reside within your own skin, you can feel it. You’re holding all of you. Your anger. Your kindness. Your judgementalness. Everything that makes up what you are. Including the fact that you may be stronger and braver than the man you’re married to.

Act 5: Jane
It was probably the most profound turning point of my whole life. I left this man and one part of me was so sad. And the other part of me said, “I’m gonna be okay. I don’ t need a man to make me okay.” That was it. And I’ve never looked back.

I wish I were braver. But I am what I am.

Your age is less chronological and more spiritual and attitudinal. I was so old at twenty. On a soul level… I saw no future. I was very dark. Very sad person. There was no joy. I didn’t really know who I was. It took a really long time to find my narrative.

This is the beginning of my last act. In order to know how to go forward, I had to know where I’d been.

Their incapacity to love wasn’t because you weren’t worthy of love. It was because they too had been wounded. And then you can forgive. It goes from one generation to another and somebody’s gotta break the cycle.

I get so sad when I think of what I wasn’t for my daughter that she needed. It’s hard to take that in because it’s so painful. But its never too late.

I’m now having relationships that are much more democratic, but I am most myself when I’m with my women friends.

It’s hard to be really happy if your life doesnt have meaning. People turn to religion because it gives them meaning. But I am an activist. 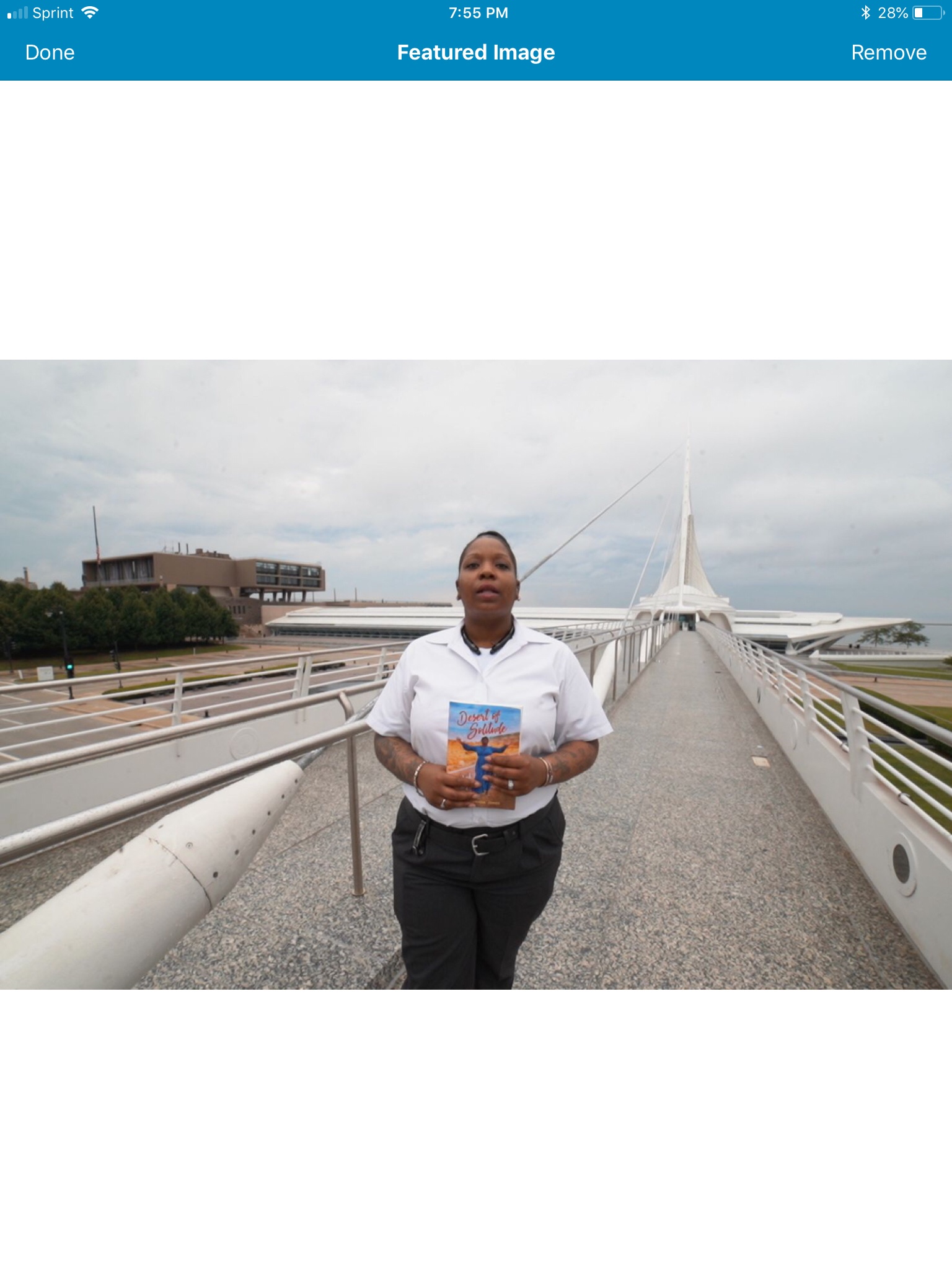 Kayla Pompey of Milwaukee, WI reviews Desert of Solitude: Refreshed by Grace written by LaShawnda Jones. Kayla openly shares how the book has helped her in her life.

“In this book, LaShawnda explains how she felt she was not enough. I think a lot of people feel like that and they don’t even realize how much they really are. They are enough. I realized I am enough. This [book] just came out a few months ago. Within that time I have been able to completely change my life around. A lot of choices I make now don’t revolve around what other people will think. I’m not trying to be so much of a people pleaser anymore. I am learning to please myself and be happy with the choices I make. In that, other people are feeding off my confidence.”

I saw my life branching out before me like the green fig tree in the story. From the tip of every branch, like a fat purple fig, a wonderful future beckoned and winked. One fig was a husband and a happy home and children, and another fig was a famous poet and another fig was a brilliant professor, and another fig was Ee Gee, the amazing editor, and another fig was Europe and Africa and South America, and another fig was Constantin and Socrates and Attila and a pack of other lovers with queer names and offbeat professions, and another fig was an Olympic lady crew champion, and beyond and above these figs were many more figs I couldn’t quite make out. I saw myself sitting in the crotch of this fig tree, starving to death, just because I couldn’t make up my mind which of the figs I would choose. I wanted each and every one of them, but choosing one meant losing all the rest, and, as I sat there, unable to decide, the figs began to wrinkle and go black, and, one by one, they plopped to the ground at my feet.

This has been one of my favorite poems since I first read it over a decade ago. In each new season of life that I happen upon it again, it speaks to me with an even greater richness and truth than the time before. I hope you hear the wisdom in the words.

After a while, you learn the subtle difference
Between holding a hand and chaining a soul
And you learn that love doesn’t mean leaning
And company doesn’t always mean security.
And you begin to learn
That kisses aren’t contracts
And presents aren’t promises

~ By Veronica A. Shoffstall

Today’s lesson: Seasons change. But the more people learn, the more they grow. Don’t avoid your lessons and resent your growth. Embrace even the pain of bursting through your emotional, psychological and spiritual retaining walls.