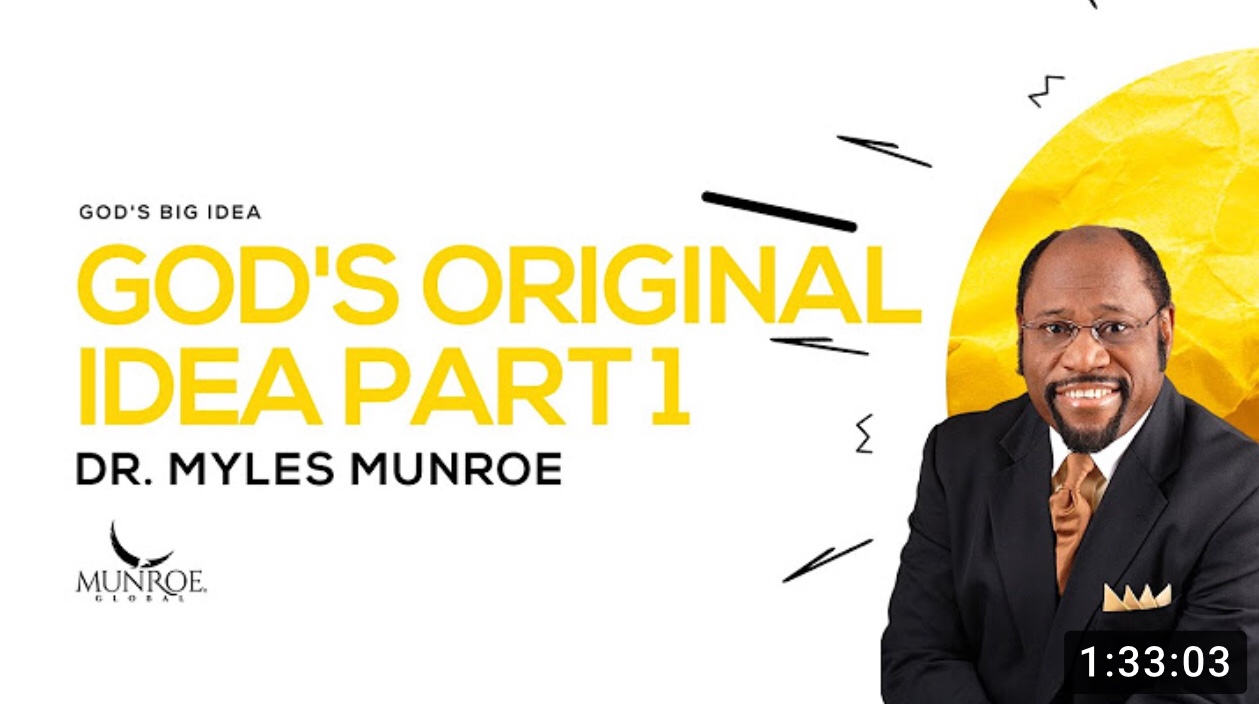 Myles Munroe is one of the most phenomenal Bible teachers I’ve ever listened to and read. I came across him early in my studies, so I’m sure some of his explanations are embedded in my thinking. I’ve been listening to sermons this weekend and thought about him. He and his wife died in a plane crash in 2014, but thanks to technology, specifically #Youtube, he’s still easy to find. This sermon begins with how ideas outlive people. How wonderful that his teachings remain with us.

This is a teaching on God’s Kingdom – Heaven – and how the Kingdom of Heaven was Jesus’s reason, purpose and message on Earth.

The heavens are telling the glory of God; and the firmament proclaims his handiwork. Day to day pours forth speech, and night to night declares knowledge. There is no speech, nor are there words; their voice is not heard; yet their voice goes out through all the earth, and their words to the end of the world. ~ Psalm 19:1-4

Samuel said to Saul, “You have done foolishly; you have not kept the commandment of the Lord your God, which he commanded you. The Lord would have established your kingdom over Israel forever, but now your kingdom will not continue; the Lord has sought out a man after his own heart; and the Lord has appointed him to be ruler over his people, because you have not kept what the Lord commanded you.” ~ 1 Samuel 13:14

The human mind may devise many plans, but it is the purpose of the Lord that will be established. ~ Proverbs 19:21

The Bible is about:

Jesus is the most Misunderstood man on Earth

Through His ideas all things were made.

In him was life and the life was light. The darkness couldn’t handle it.

Jesus Christ is God’s ideas in a body.

We don’t need to wonder what God is thinking anymore because Jesus is His expressed words.

Jesus didn’t come to destroy men’s lives but to save them.

Jesus was not a prophet

Now when Jesus came into the district of Caesarea Philippi, he asked his disciples, “Who do people say that the Son of Man is?” And they said, “Some say John the Baptist, but others Elijah, and still others Jeremiah or one of the prophets.” He said to them, “But who do you say that I am?” Simon Peter answered, “You are the Messiah, the Son of the living God.” And Jesus answered him, “Blessed are you, Simon son of Jonah! For flesh and blood has not revealed this to you, but my Father in heaven. And I tell you, you are Peter, and on this rock I will build my church, and the gates of Hades will not prevail against it. I will give you the keys of the kingdom of heaven, and whatever you bind on earth will be bound in heaven, and whatever you loose on earth will be loosed in heaven.” Then he sternly ordered the disciples not to tell anyone that he was the Messiah. ~ Matthew 16:13-20, see also Mark 8:27-30 and Luke 9:18-20

Who do you say I am?

Upon that declaration (rock) I will build my ecclesia (church).

Church is a government agency, not a religious body

STILL EDITING – WILL UPDATE WITH LINKS BELOW

Matt 5:3 Blessed are the poor in spirit, for theirs is the kingdom of heaven.

Matt 6:33 But strive first for the kingdom of God and his righteousness, and all these things will be given to you as well.

Why do you worry about what you will eat, drink and live. Take no thought of these things.

Only pagans pray for those things. (Religious devout)

Your Father knows you need those those things.

Jesus: Begin to know who you are first

Luke 4:43 “I must proclaim the good news of the kingdom of God to the other cities also; for I was sent for this purpose.”

Matt 6 keys of the kingdom

Some of you standing here will not see death

Matt 13 knowledge of the secrets of the kingdom of heaven

Matt 13:19 when some hears the message of the kingdom and doesn’t understand it, the devil himself comes to take it from you.

Miracles are a sign that another culture has arrived.

**Luke 16 law and prophet complain since John, there is only one message.

Thy kingdom come, your ideas be done on earth as in heaven

Jesus: Father do not take them out of the world.

The culture of God

The power of yeast is influence

Kingdom of heaven is like yeast. It is the influence.

You can’t change what you avoid. We must be integrated in the system. Don’t leave the state to the devil

My kingdom is from another place

Matt 10:7 as you go, preach this message: The kingdom of Heaven has arrived.

Repent (change your ideas, thinking) the kingdom is near

To become a citizen, you must be born into it, born again. Born of the holy spirit when it comes upon you.

You cannot be a member of a country. Members have no rights.

Corinthians 5:20 your citizenship is in heaven.