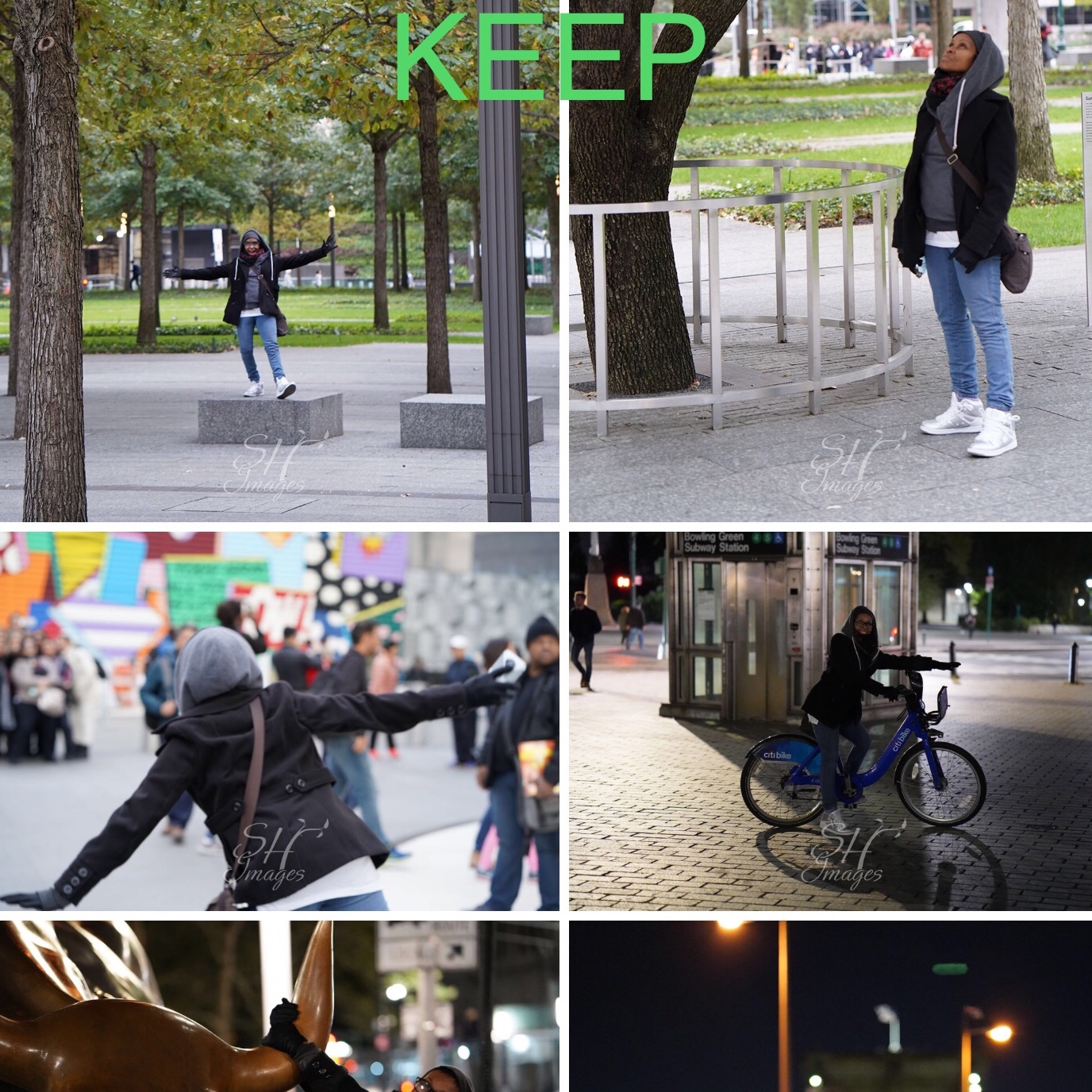 I may go to friend jail for this, but I think it’s worth it. An old friend, R, visited me in New York City to celebrate her 50th birthday. I told her to bring something she wanted to be photographed in and to think of her Woman Word for my I AM WOMAN photo essay project. When she got here she gleefully said she was happy to take pictures for the project because when I was in Milwaukee (where she lives) in July she hadn’t been in a good place to participate.

No worries. No offense or judgment. Keep it moving.

I told her I had a new lens – it’s a Zeiss Batis 85mm portrait lens – I wanted to practice on her during her visit. Being a woman of my word, I did exactly that. She was in NYC for three full days. Her entire trip was essentially chronicled through my lens. Though that wasn’t my intention, I got some amazing shots.

On the second night, during our visit to the Brooklyn Bridge, I knew instantly the close-up images of her with Freedom Tower as her backdrop, where the images to use for I AM WOMAN. I told her right there, in the moment, “These are your money shots!” I also told her she was a natural in front of the camera. The images I was getting were simply amazing. To me, anyway. And perhaps I’m biased on three levels: as friend, photographer and project curator.

My goal was to avoid turning her visit into a counseling session and simply do things she had expressed an interest in. I stayed silent and performed as her personal photojournalist – with a good deal of excitement initially.

While on the Brooklyn Bridge, I asked her what her word was. She said a couple of words that didn’t represent her at all. I then framed the question for her, “I’m not asking for an aspirational word, a word you hope to become. I’m asking for a word that represents how you see yourself. Or what your womanhood means to you.” She said she would think about it and get back to me. I explained that I use the word as a guide for the shoot. A reminder that the shoot was in progress…. She never consciously gave me her word.

I thought about posting her I AM WOMAN image as “I Am [unknown].” However the core of this project is about how Women SEE and IDENTIFY themselves. So I took a step back. I sent her image gallery to her as something of a memory book. Images I knew she liked and wanted as well as images I like (some of which were images she insisted she looked “ugly” in and immediately insisted I delete. I refused on the spot. The images she defamed as ugly were taken at the 9/11 Memorial Fountain at Freedom Tower and across the road in front of the Oculus. The images are somber, unmasked, and intriguing. Frankly, I think they’re beautiful.

But again, this isn’t supposed to be about me!

I AM WOMAN is a project about womanhood. All of it. Everything it means to be a woman. The first phase of this project is focusing on the experiences of Black Women in America. By and large, we embody pain, disappointment, rage, resentment, bitterness and frustration. Yet in the same body and space we are joy, love, loyalty, commitment, faith, grace, forgiveness and eternal hope. For most of her adult life, Friend R has only focused on the dark emotions. The residue of her constant focus is visible. It’s audible. It’s painfully disturbing to witness.

The short of her response to her image gallery was, “Thanks for all your hard work! I see sickness in most of my photos…. I choose the ones I like…. I ask that you delete the rest.”

I was stunned, angry and very much offended. Not only did I see the images as work product, they also represented a great time in the City with an old friend. Over the last few days, I released my frustration over her request and comments. I literally have much bigger issues to deal with. However, at the same time I don’t want to dismiss this episode as inconsequential, because it is not. It actually speaks to the heart of my project. The juxtaposition of one’s womanhood not being anything to celebrate against fully embracing one’s womanhood with all its pain and glory.

Basically, I think her images and her comments add a great deal to the larger conversation of Black Womanhood in America. How we internalize our grief and disappointment. How they solidify and weigh us down in a deep abyss of cyclical suffering. How we can become incapable of seeing pass that one thing (situation, heartbreak, betrayal) that first knocked us down. I do believe she can’t see pass the sickness within her. I also believe that sickness is the result of years of anger, resentment and bitterness that she has consistently refused to let go of. We become what we harbor and feed.

I would love to hear your thoughts, not just on the images but on the story as well.

She liked less than 20 images. Some are below.

These are some of the ones she wants deleted.