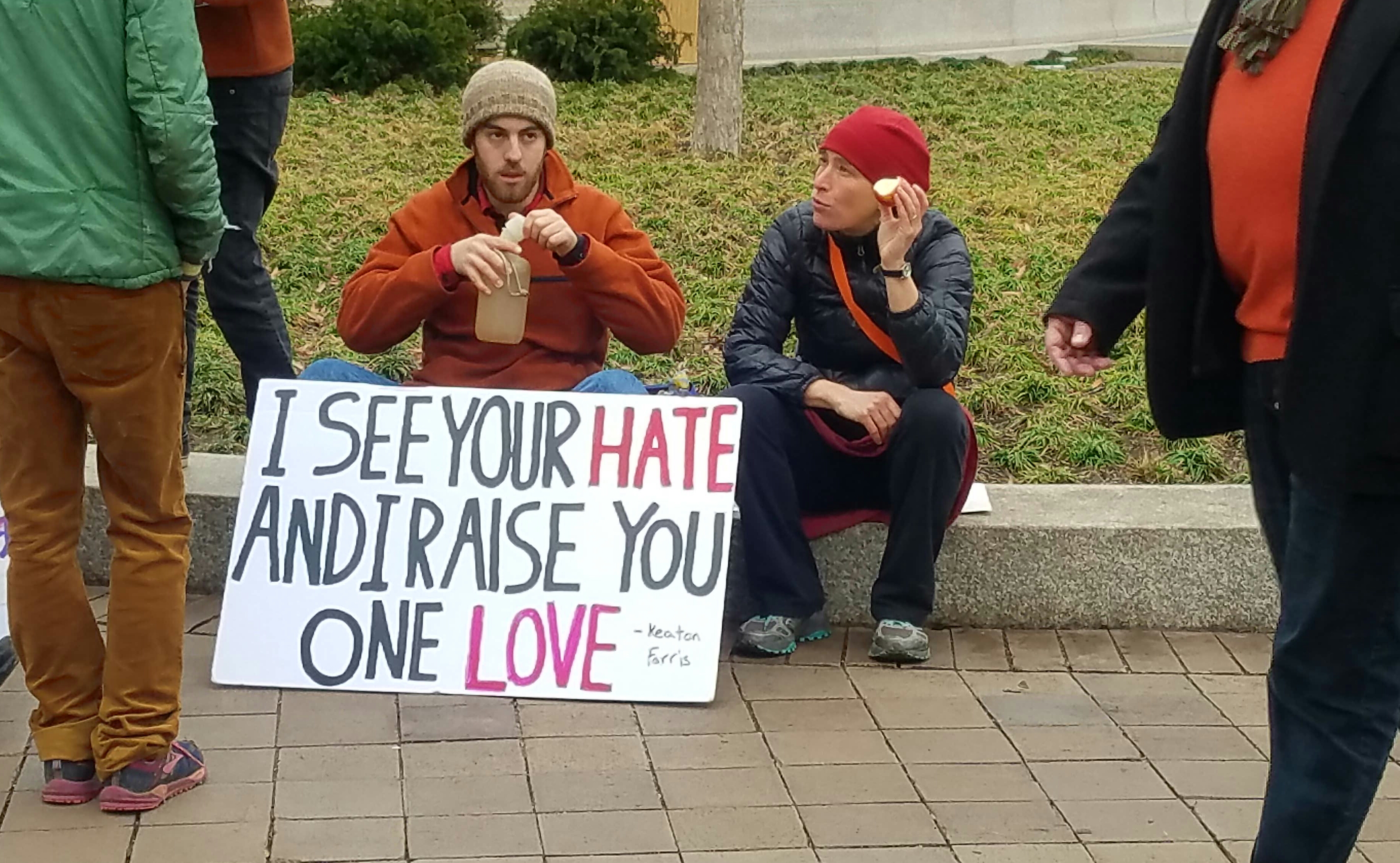 The third week of January 2017 will long be remembered. From the beginning of the month, I had planned to join the Women’s March on Washington. At the beginning of the week of the March, I thought it best that I also join my congregation in three days of fasting and prayer for healing for our nation. I’ve never been good at church-led fasts. In the past I fell off quick and felt loads of guilt for low will-power and focus. So, this is probably the first fast I joined a congregation in in nearly a decade. Three days, liquids only. During the work week. Within the first 24 hours, at the end of the first work day, I ate a bread roll my manager put on my desk. She shares her lunch with me every day and I usually pass on what I don’t eat. I put the roll in my cabinet but could not stop thinking about it for the next few hours. I eventually gave in to temptation and ate it. The next day when my cube mate shoved her lunch in my face to show me the delicious options in the cafeteria – one of my favs, Indian fare with red lentils, samosas and mango chutney – I blurted out, “I’m fasting! Since when do you shove food in my face?” She apologized profusely since she had no idea. I had no plans to share. But  I quickly realized the open sharing environment with my office chums dictated that I declare my goals for the week. I survived the remaining fast with no further incidents.

I attended each of the three nights of prayer service as well. Honestly, I thought I might fall off of that too. Attending service in person has not been one of my preferred activities over the last couple of years. I’ve streamed or played back far more services than I’ve shown up for. The general shallowness of interaction with congregation members has left me disenchanted and uninterested in showing up for “fellowship” that doesn’t last beyond a greeting and a song.

Inauguration week was different. I felt compelled to join my prayers to those of my congregation and lift my voice in praise and supplication. I didn’t want to go protest without first girding myself in worship. The third night of prayer service was the first night of inaugural protests and I was euphoric. I left work early to head to a rally in Columbus Circle that was essentially a call to action. The theme was 100 Days of Resistance. The goal is to get people to reach out to their representatives every day to voice their concerns and express their hopes for the direction this country moves in. I didn’t want to leave the rally but I didn’t want to miss prayer service either. After an hour and a half I high-tailed it down the street to my church. It was the perfect ending to a great day and a great send-off to the Women’s March on Washington.

The Women’s March was phenomenal. Overall the energy was amazing. Except for one instance. There was a Christian group posted up on Pennsylvania Ave down the street from the Capitol. In a space where crowds representing every imaginable issue in America today stretched as far as the eye could see in every direction, this was the only spot of contention, anger, disrespect and hatred that I encountered. I stood there observing for a bit, spellbound, trying to hear the words that were being shouted and chanted. Looking around in a daze to read the signs people were holding up. I walked around the circle of people to get a better vantage point and perspective on what was being said by whom. My heart ached. I wanted to grab the bull horn from the man in the middle and simply say to the angry crowd: God loves you! Ask me how much!

Jesus didn’t come to us to tell us how horrible we are. He didn’t walk through the streets pointing out people and calling out their sins. Where in the Bible does it say Jesus told people they were going straight to hell? Jesus has never been about condemnation. He is, and always has been, about hospitality, welcome and acceptance. He is a teacher. His lessons enlighten us as to our true nature and purpose in Him.

I debated just walking up to the speaker and just pulling him aside. In the end I walked around to one of the men encircling the speaker and holding a banner. My conversation. With him can be heard on this video.

Condemnation vs. Love from LaShawnda Jones (NS) on Vimeo.

I approached him with the words, “As a Christian Woman, this is hurting my heart. We are to proclaim God’s love to people. There has to be a softer way for you to deliver this message.” He brushed me off with, “We are each called differently. This is how we serve.” Yet when the speaker got tired of getting shouted down, he walked over to the man I was speaking to and essentially said, “I’ve had enough, your turn!” To which the man who was adamant about his service, declined with a sharp shake of his head and refuse to enter the center of the lion’s den. I called him out for that to. He wasn’t interested in anything I had to say.

God is love, and those who abide in love abide in God, and God abides in them. Love has been perfected among us in this: that we may have boldness on the day of judgment, because as he is, so are we in this world. There is no fear in love, but perfect love casts out fear; for fear has to do with punishment, and whoever fears has not reached perfection in love. We love because he first loved us. Those who say, “I love God,” and hate their brothers or sisters, are liars; for those who do not love a brother or sister whom they have seen, cannot love God whom they have not seen. The commandment we have from him is this: those who love God must love their brothers and sisters also.