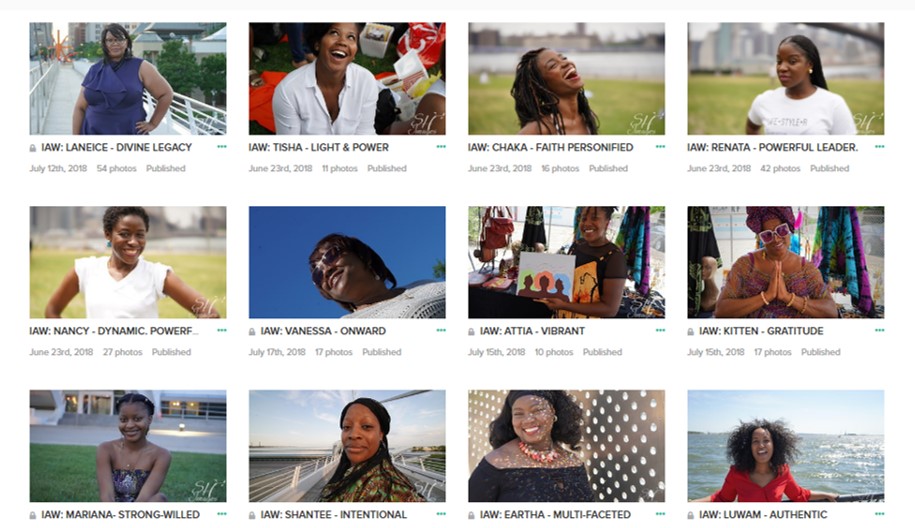 I spent the summer photographing women.

In February, I quit my corporate job with a determination to pursue my creative interests. Specifically, writing and photography. In the late spring I decided I wanted to chronicle this moment we’re living in by putting a camera and a mic in front of everyday women and asking them what their womanhood means to them.

I AM WOMAN is an essay and portrait book project that was born from a desire to give Women a platform to describe themselves. The catalyst for the idea was the state-sanctioned assault by police officers on Chikesia Clemons at a restaurant in Alabama. In the video (https://www.youtube.com/watch?v=a3eI5F-AUVw) you can see two male officers yank on her arms, pull her out of her seat, throw her to the ground, sit on her, threaten to break her arm, choke her, expose her breasts, then flip her around by her neck and belt to put her face down on the restaurant floor. A third officer stands over her the whole time. Unfortunately, these videos are not uncommon. However, what stung was seeing male patrons in the background continue eating as if a dehumanizing physical, racial and sexual assault was not taking place in their presence. The only person trying to help Chikesia was her female friend who also filmed the assault. I am hard-pressed to imagine men sitting by so calmly had a white woman been so brutalized in their presence.

The foundation of the project is the desire to combat the idea of women as sexual objects. There has long been an extremely visceral hyper-sexualization of womanhood, girlhood, and the feminine form. For Black Women and Girls, we are sexualized, used, abused and discarded without even the defense of our humanity. We are inundated with images and words that render women as no more than shallow, one-dimensional receptacles for men/boys to deposit their disdainful waste into or to fixate on as a waste depository goal.

The title of the project derives from a combination of Sojourner Truth’s 1851 speech, “Ain’t I A Woman?” and the “I AM A MAN” signs used during the Civil Rights Movement in 1968. It’s unsettling that anyone still needs to declare their personhood in 2018, but here we are.

As a Black Woman, I want to explore and present the experiences of Black Women in America as the first stage of the project. I want to share the every day woman’s perspective of herself in an environment, culture and country that is intent on not acknowledging her except as a dehumanizing stereotype. Basically, I am tired of hearing and seeing what the world thinks of Black Women. I want to know what Black Women think of themselves.

Overall, in the larger Sisterhood of Womanhood, I know the struggle is universal. Across the United States, no matter what demographic groups we fall into, Women are essentially telling the same story. We aren’t seen. We aren’t valued. We are not respected. We have to fight for any measure approaching equality to a standard set by men. We may have different starting points, but for the most part we are all chasing the same goals: love, acceptance, appreciation and respect for our contributions.

I didn’t have any defined expectations for the contributors when I began, but I am surprised and humbled by the messages (read: heart) shared by the Women and Girls who have participated in the portrait sessions and submitted poems and essays so far.

Though the written submissions for Phase 1 is focused on Black Women, the initial portrait sessions were open to all women. From June to September, I offered free portrait sessions open to anyone interested in participating in the I AM WOMAN project. During this time, I photographed fifty-five Women and Girls across the country, including New York City, Chicago, Milwaukee, and Phoenix. The goal of the photo-shoots was for the Women to represent the word they used to describe themselves. “I AM WOMAN. I am _________________.” Quite a few used more than one word. Of the sixty-three words collectively used to describe the participants of the portrait sessions, I’m glad to report “sexy” was not one. The most common words used for self-description were: Strong, Powerful/Power, and Love.

Happily, I have more than enough photos for the portrait portion of the I AM WOMAN book project. However, I am still seeking written contributions for Phase 1: Experiences of Black Womanhood in America. If you would like to contribute, please email Shawnda@Spirit-Harvest.com.