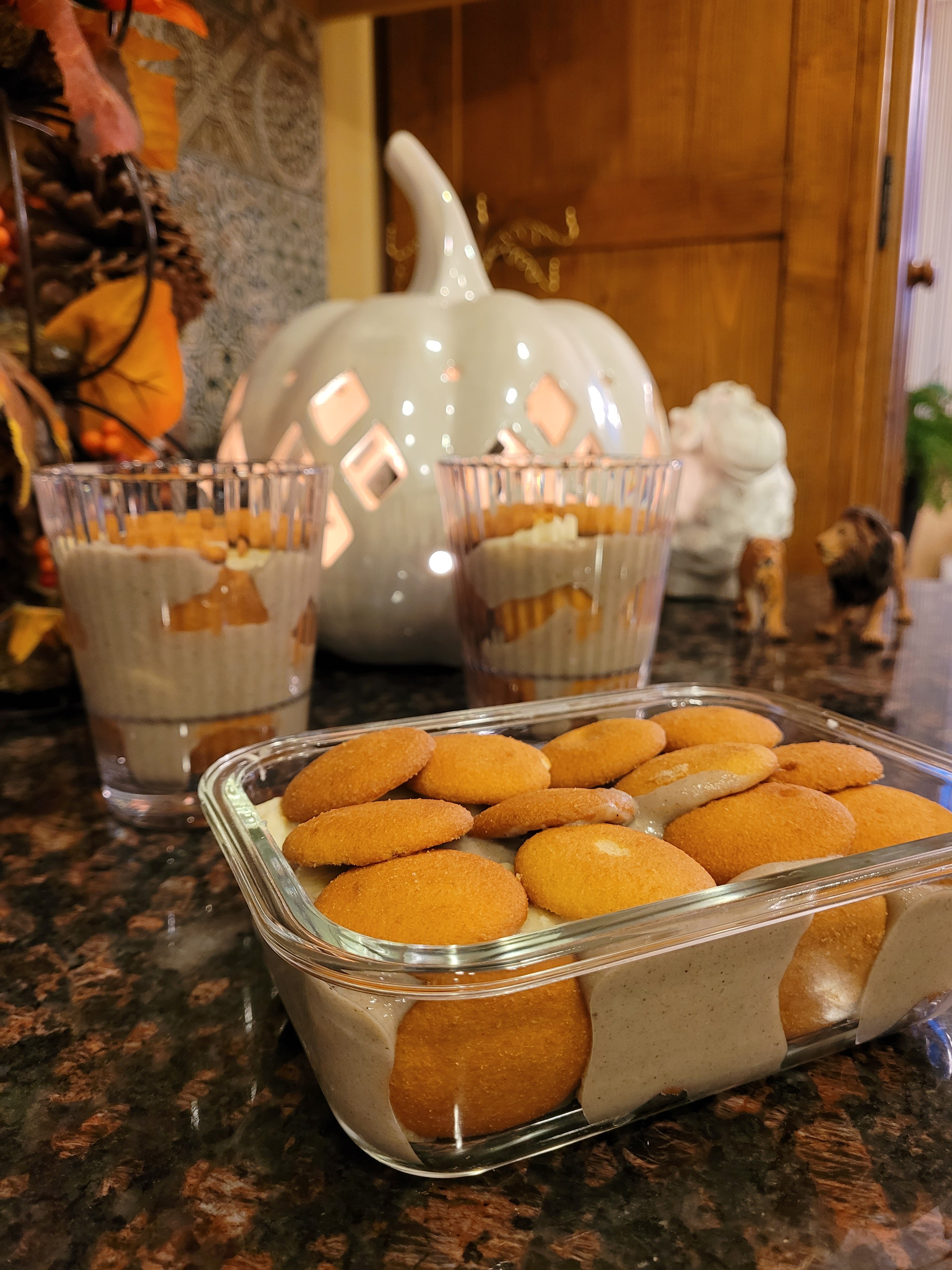 Lockdown and a sweet tooth

At the beginning of Covid-19 shutdown, I stocked my cupboards like most folks. Baking and desert items were high priority. Two boxes of Nilla wafers somehow made it in the grocery cart of emergency foods. At the time, making homemade banana pudding sounded like amazing self-love.  One of those boxes disappeared as snacks and the other just got used for what it was intended.

But it took some inspiration. I had been sick off and on for many months before I was diagnosed with diabetes in July. I immediately thought I would throw away everything in my house that contained sugar but that would’ve basically emptied my cupboards! After getting my glucose under control, I rationed my way through some of the foods I don’t plan on repurchasing, like those Nilla wafers. One day, I noticed the pudding recipe on the side of the box. I’m sure I noticed it when I bought it, but as I get older, every time I see something it’s like the first time. **deep sigh** As I read the recipe, I thought, “I could try this with healthier, less sugar options.” So far, I’ve attempted three reduced sugar or sugar-free banana pudding recipes. Each of them had strong points an major bloopers on my part.

Major adaptations to my illness had to happen in the pantry and fridge first. Part of living off the beaten track in a semi-rural town means a lot of home cooking and baking. In order to eat healthier and better overall (my goal is for each meal) I have to set myself up with helpful and beneficial building blocks. I’ve always been big on fresh fruits and vegetables, but now I buy less fruit because of the natural sugar content, and far more vegetables. In addition, the sweet fruit I like is now added to my salads (apples, pears, plums) or sauté in butter (bananas, berries) when I have to have pancakes – when the sugar-free syrup just won’t do. Another big change was investing in different flours with lower carb counts and no sugar. So far, I’ve stocked almond, coconut, oat, and carbulose flours. Tapioca and gluten-free all-purpose flour were already staples in my pantry. Finding a great non-sugar sweetener – with no aftertaste – has been the bigger challenge.

Over the last few years, I thought of sugar alternatives as Sugar in the Raw, honey, agave and maple syrups. Coming to the realization that these are all still pure sugars was painful. What are pancakes without 100% maple syrup? Why bother? Well my sugar alternatives were alternatives at all. Since July I’ve been trying SteviaLeaf sweetener, SteviaLeaf sweet drops, apple sugar (a low glycemic sweetener), Swerve (granular, brown and confectioners replacements made of erythritol and prebiotic oligosaccharides blend) and Natural Birch Xylitol Sweetener (haven’t opened yet).

Swerve can be used as regular sugar, cup for cup in recipes, but I find it’s far too sweet for that. Every recipe after my first use, I’ve cut the cup of sugar to half, a quarter or a third depending on taste.

2. Reserve 10 wafers for garnish. Spread small amount of custard
on bottom of 1 1/2-quart casserole; cover with a layer of wafers
and a layer of sliced bananas. Pour about 1/3 of custard over
bananas. Continue to layer wafers, bananas and custard to make
a total of 3 layers of each, ending with custard.

4. Bake at 350°F in top half of oven for 15 to 20 minutes or
until browned. Cool slightly or refrigerate. Garnish with
additional wafers and banana slices just before serving.

This recipe probably would have been the best of my attempts if I hadn’t used a makeshift double boiler – pot within a pot. The pudding didn’t thicken as much as it should have. Also, I wasn’t able to hand-whip the egg whites into peaks so adding the swerve didn’t a merengue make.

Yummly is a database of recipes. This recipe posted by Begin Within Nutrition is the one I attempted but I’m unable to download the instructions. I basically did I what I know to do with the ingredients. Still had plenty of Nilla Wafer left over to pretty up the containers.

I messed this one up. There’s no photo evidence of this batch. This one could have also been the best had I not blanked and combined measurements from two different recipes. Ultimately, I used too much cinnamon and too little tapioca flour and too little coconut milk. The pudding had a great flavor – best flavor of all three recipes, but it didn’t thicken once the puréed bananas were mixed in.

I wanted to try a banana pudding with homemade sugar-free vanilla wafers so I went back to the Sugar-free Diva Blog. I decided to try the Carbquick flour for the wafers. Can’t say I like the taste of the wafers on their own. They tasted very salty to me, even though I added no salt tot he recipe. So I assume the taste flowed through from the Carbquick flour. That being said, the combination of the thin pudding with the sugar free wafer was a burst of flavor-filled joy!

1. In a large mixing bowl, whisk together the eggs, brown sugar, flour and cinnamon. Set aside.
2. In a blender, puree the bananas. Set aside.
3. In a heavy pot over medium heat, add 3 cups of the milk and bring to a simmer, stirring frequently to avoid scorching. Just as the milk begins to boil remove from the heat and whisk into the egg mixture in a slow, steady stream (this helps avoid lumps).
4. Return the milk and egg mixture to the medium heat in the heavy pot and bring to a gentle simmer, stirring constantly to avoid scorching. Stir in the vanilla flavoring, then the banana puree and pour the mixture into a clean bowl.
5. Chill for 2 hours and serve.

For a decorative twist, layer into parfait glasses, alternating pudding and ginger snap cookies, then refrigerate 2 hours, and serve garnished with whipped cream and a mint sprig.

Sugar Alternative-1 cup. 1:1 equivalent in volume to sugar. I use granular for best results.

Preheat your oven to 325 and prep a cookie pan for nonstick. I use parchment paper. Sift or mix together the flour and the baking powder in a mixing bowl. Set this bowl aside. In a mixing bowl, cream together the butter and he sugar alternative. Next, add the dry ingredients from the first bowl to the mixing bowl. I add a half at a time, gently stirring between additions. Stir in the egg and vanilla extract to the mixing bowl. Use a teaspoon or tablespoon to drop the cookies on to your prepped pan. Bake for 14-16 minutes or until the edges begin to brown.