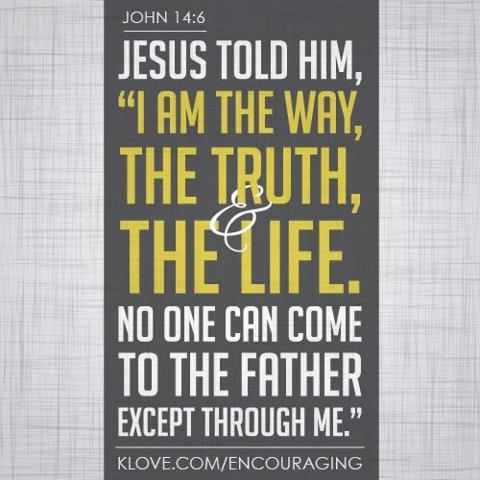 26 I am writing this letter about those people who are trying to lead you the wrong way. 27 Christ gave you a special gift that is still in you, so you do not need any other teacher. His gift teaches you about everything, and it is true, not false. So continue to live in Christ, as His gift taught you. (1 John 2: 21-26)

I had a conversation Christmas night that was still reverberating in my mind the next morning.

The person was telling me that all religions that put god at the top are essentially seeking the same thing. The believers of these religions all believe in the same god. He went on to say that he is partial to Islam because it’s the religion that makes the most sense to him. He appreciates Jesus as a prophet. He acknowledges that Jesus came and did what He was supposed to do – as He was instructed to do by God. Then he went on to say that Jesus is no more special than any other prophet. No more special than Moses or Noah. All the prophets had a job they had to do, he said, and then continued, “My niece is running around saying today is God’s birthday… this is what I don’t get about Christians – how they can believe Jesus is God and that God was born.”

We both said at that point with equal smugness, “God doesn’t have a birthday.”

The last thing I wanted to do was have a debate about Jesus on Christmas. I’m not a Jesus scholar. I’m a Jesus believer. And as a believer, there are some things that I accept simply because they are, not because I can make sense of it.

One thing I intuit for sure, because of my belief and faith, is that God IS – He has always existed and always will exist. He is the creator of all things – seen, unseen, spiritual, material, emotional, physical, and psychological.

The person claiming Jesus wasn’t special beyond being a prophet didn’t allow me much space to speak. You know how those “conversations” go, where people are intent on speaking their mind, but aren’t interested in hearing anything on yours. So I had to interrupt him as he was going down the line of prophets and their assignments, “There is a hierarchy to the prophets,” I said. “Yes, they all had their own responsibilities, but Jesus is the only one called the Son of God. That makes Him more than just a prophet.”

“Yes. The Bible teaches that Jesus is the one and only Son of God and it is only through Him that we can be adopted as sons and daughters of God.”

“Listen, LaShawnda, there’s no need to argue with someone who’s already admitted a belief in God.”

I was a bit bemused by the way he shut me down. But then I realized that most of the conversation was him saying what he wanted to say – I didn’t have the space to argue. As I write this, I realize that I said exactly what needed to be said.

10  He came into the very world he created, but the world didn’t recognize him. 11 He came to his own people, and even they rejected him. 12 But to all who believed him and accepted him, he gave the right to become children of God. 13 They are reborn—not with a physical birth resulting from human passion or plan, but a birth that comes from God.

14 So the Word became human and made his home among us. He was full of unfailing love and faithfulness. And we have seen his glory, the glory of the Father’s one and only Son.

16 From his abundance we have all received one gracious blessing after another. 17 For the law was given through Moses, but God’s unfailing love and faithfulness came through Jesus Christ. 18 No one has ever seen God. But the unique One, who is himself God, is near to the Father’s heart. He has revealed God to us.  (John 1:10-14, 16-18)