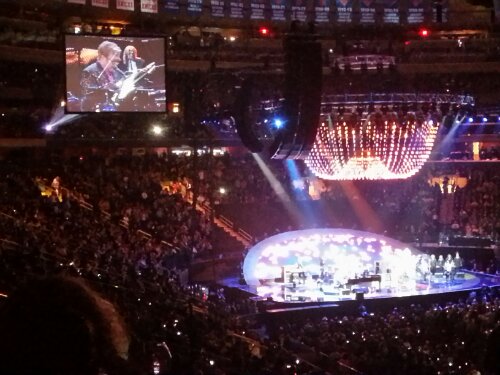 A highlight of my 2013 holiday season was receiving two box seat tickets for an Elton John concert in Madison Square Garden courtesy of a vendor. Even though I was physically, mentally and spiritually exhausted, was deep into finals (grad school) and less than a week away from the biggest event I plan at work, I accepted the tickets, called a friend and decided to enjoy the evening. It turned out to be a quintessential New York night… and quite cathartic.

I didn’t think the below was a holiday-friendly post, so I held off on posting. Then I didn’t want anyone to take it personally, so I held off some more. Then I just stopped making excuses and just tried to work around it. Tonight (Feb 21, 2014) I had an exchange on my personal Facebook page that sort of echoed this post. So, I figure it’s time to post the thoughts I was holding back on sharing.

I’m feeling great. I’ve noticed a new tendency, that I hope will become standard practice for me. It began as a tentative whisper. Each time I say it, it gets a little louder. The more I say it, the more I realize how deeply I mean it. The more I understand the meaning of my words, the more intentional I become.

Two simple words. Spoken to people in response of the misery they continually dump into my my life – my ears, my mind,  my heart, my spirit. People who refuse to deal with their problems partly because they usually have a sympathetic listener in me. People who complain as a way of sharing conversation. People who can’t say anything good about their lives. People who hate themselves, their lives, and most likely hate me too.

As soon as I feel my eyes glaze over, the words slip out:

“I can’t… listen to any more of your anger, frustration, resentment or bitterness.”

“I can’t… receive your misery as my obligation of friendship.”

“I can’t…continue to enable you in your self-pity.”

“I can’t… soar from my own moorings with your baggage weighing me down.”

“I can’t… accept the choking dose of negativity you’re giving to me.”

Nearly two and a half hours into the concert, after I wrote the above passage to Elton John singing his career soundtrack live in a flawless voice, he started belting out I Believe in Love. And it all made sense.

Writen by Elton John and Bernie Taupin
Made in England Album

I believe in love, it’s all we got
Love has no boundaries, costs nothing to touch
War makes money, cancer sleeps
Curled up in my father and that means something to me
Churches and dictators, politics and papers
Everything crumbles sooner or later
But love, I believe in love

I believe in love, it’s all we got
Love has no boundaries, no borders to cross
Love is simple, hate breeds
Those who think difference is the child of disease
Father and son make love and guns
Families together kill someone
Without love, I believe in love