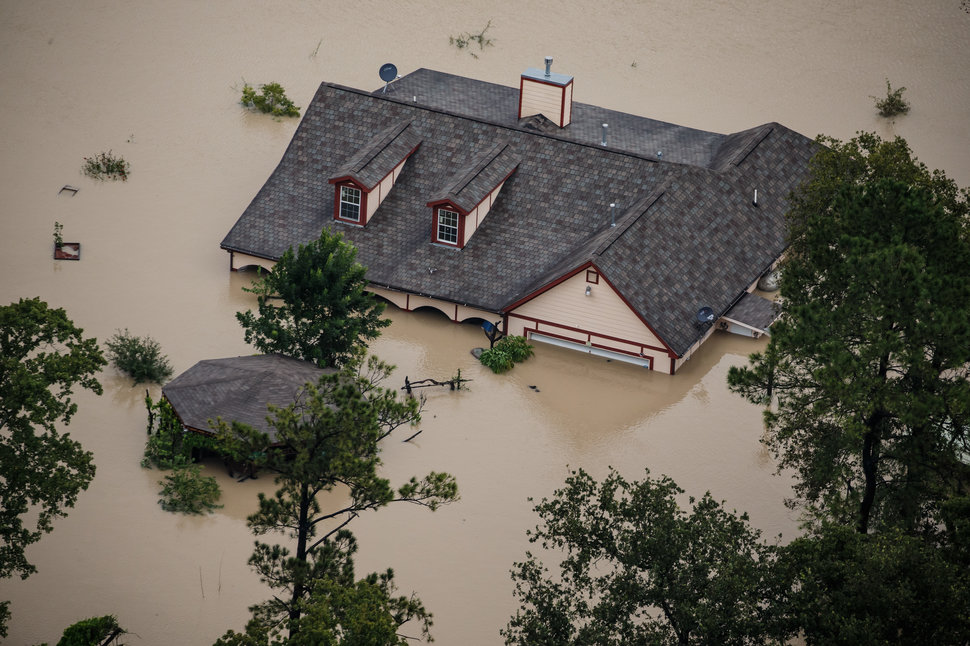 A terrible storm came into a town and local officials sent out an emergency warning that the riverbanks would soon overflow and flood the nearby homes. They ordered everyone in the town to evacuate immediately.

A faithful Christian man heard the warning and decided to stay, saying to himself, “I will trust God and if I am in danger, then God will send a divine miracle to save me.”

The neighbors came by his house and said to him, “We’re leaving and there is room for you in our car, please come with us!” But the man declined. “I have faith that God will save me.”

As the man stood on his porch watching the water rise up the steps, a man in a canoe paddled by and called to him, “Hurry and come into my canoe, the waters are rising quickly!” But the man again said, “No thanks, God will save me.”

The floodwaters rose higher pouring water into his living room and the man had to retreat to the second floor. A police motorboat came by and saw him at the window. “We will come up and rescue you!” they shouted. But the man refused, waving them off saying, “Use your time to save someone else! I have faith that God will save me!”

The flood waters rose higher and higher and the man had to climb up to his rooftop.

A helicopter spotted him and dropped a rope ladder. A rescue officer came down the ladder and pleaded with the man, “Grab my hand and I will pull you up!” But the man STILL refused, folding his arms tightly to his body. “No thank you! God will save me!”

Shortly after, the house broke up and the floodwaters swept the man away and he drowned.

When in Heaven, the man stood before God and asked, “I put all of my faith in You. Why didn’t You come and save me?”

This cautionary tale has been on my mind for a couple of months. I am in the process of my own response to the reminder, but I feel compelled to share now rather than later.

Often we know what we need, but because of our preconceived notions of how we will receive it, we miss it when it’s right in front of us.

I’ve been ready to relocate since 2011. I arrived in New York City shortly after my thirtieth birthday in September 2005. It was a place I had always wanted to live. Since I hadn’t cultivated thoughts of other cities, I couldn’t envision myself anywhere else when I was ready to go. I began scouting cities as possible new homes in 2012. In September 2016, I visited Tucson for the first time. As I drove along the road leading to the first neighborhood on my list to visit, an incredible awe and peace came over me. My immediate internal response to the awe and peace was, “This is home.”

A couple if months later, in December I returned to put a deposit on a lot at the end of that road and began building my new home. I closed on it in June 2017 then returned to New York quietly excited but troubled.

There is no logical or mathematical way that I can explain my ability to purchase a second home – most certainly not one in a desert across the country. It was a very stressful year to say the least, but only because I chose to worry about money and my ability to to cover my debts. 🙂 It was blatantly obvious from the beginning of the process that God was leading. I was following. He wanted me to get some place and He wanted me to get moving now. Even while believing this, I still agonized over the details.

My spirit was willing but my flesh was weak.

Spiritually, I know everything that is happening in my life right now is God’s plan, positioning and timing. He’s about to perform His Word in my life and turbo boost me into my purpose. Spiritually, I know that the house and transcontinental move are not the “big thing.” Perhaps that’s the source of the underlining fear….

Physically, in my flesh, I can see myself barely staying above water with my current income spread across two mortgages and all associated expenses. My goal was to complete my move when all my ducks were in a row. Secure job in new city, secure renters and possible buyer for NYC apartment and perhaps a renter for the spare room in the new house. I wanted to be sure all my financial obligations were covered before I gave up my Big City job. I didn’t want to risk foreclosure after all the hard work and sweat equity I’ve put into acquiring what I have.

The missing detail is that I haven’t been able to secure a position in Tucson or a location-flexible (remote) role in the last fifteen months. As the months have passed following  my closing with no clear path to completing my move, I became despondent. I kept asking God to tell me what my next step was. My employment and NYC apartment concerns aren’t easy to disentangle from. These concerns overshadowed how much God had already glided me through.

My mental maneuvering immobilized me. I was gripped in a fear I didn’t recognize and therefore couldn’t acknowledge. My inability to secure employment on the other side of this move exposed the condition of my faith to me. This has humbled me greatly.

The rich young man grieved by the thought of selling all his possessions to follow Jesus has been on my mind lately (Matthew 19:16-26).  I’ve been ashamed much like Peter must have been when he realized that he did indeed deny Jesus three times before the rooster crowed.

I wouldn’t have thought that my faith would ever be a weak link for me, but I should’ve known. How can we be strengthened if we aren’t tested?

A few weeks ago, I fell asleep in the middle of a prayer. My forlorn plea was, “Father, please tell me what my next step is.” For months, I had been asking Him to tell me what to do. I could see the big picture (or rather the mid-range picture), but I couldn’t see the strokes or the steps to get to that picture without losing ground. When I woke up the next morning, the answer in my spirit was a straight-forward, “I have already given you a way out.”

With that, I got up and went about my Father’s business.

These things happened to them to serve as an example, and they were written down to instruct us, on whom the ends of the ages have come. So if you think you are standing, watch out that you do not fall. No testing has overtaken you that is not common to everyone. God is faithful, and He will not let you be tested beyond your strength, but with the testing He will also provide the way out so that you may be able to endure it. ~ 1 Corinthians 10:11-13