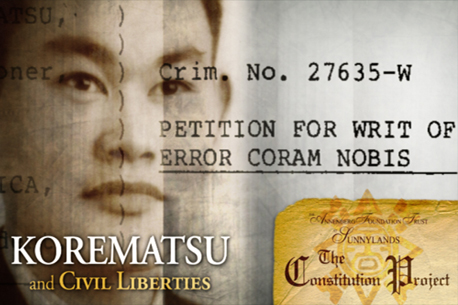 Fred Korematsu Day of Civil Liberties and the Constitution is a state holiday celebrated in California and Virginia.

Fred Toyosaburo Korematsu (January 30, 1919 – March 30, 2005) was an American civil rights activist who objected to the internment of Japanese Americans during World War II. Shortly after the Imperial Japanese Navy launched its attack on Pearl Harbor, President Franklin D. Roosevelt issued Executive Order 9066, which authorized that individuals of Japanese ancestry living on the Pacific Coast were to be removed from their homes and forced to live in internment camps, but Korematsu instead challenged the orders and became a fugitive.

The legality of the internment order was upheld by the Supreme Court of the United States in Korematsu v. United States; this ruling has never been explicitly overturned.[1] Korematsu’s conviction for evading internment was overturned decades later after the disclosure of new evidence challenging the necessity of the internment, evidence which had been withheld from the courts by the U.S. government during the war. [Wikipedia/Fred_Korematsu]

This woman was having a conversation with someone who had already gone down the subway steps.

Walking along 5th Ave in Unin Square/Village area. Playing with my flash.

Photos: On February 19, 1942, President Franklin D. Roosevelt signed Executive Order 9066, thereby making a law to forcibly remove all people of Japanese ancestry from the West Coast to incarcerate them in American concentration camps.

Korematsu v. United States (1944) was a significant United States Supreme Court case that ruled that the Government’s use of Japanese internment camps during World War II was Constitutional. This decision, written by Justice Hugo Black, was very controversial because it was the first time the Supreme Court ruled on racial discrimination based on the strict scrutiny standard. This means that the Supreme Court applied the most stringent interpretation of the law to justify the use of Japanese internment camps as superior to individual rights.

Executive Order 9066, passed in 1942 by President Franklin Delano Roosevelt, ordered those with “Foreign Enemy Ancestry” to be sent to internment camps. Although the
order did not technically name any ethnic groups, this applied to about 120,000
Japanese Americans. The U.S. Government considered these individuals to be of
heightened risk to national security. [Constitution.laws.com]

In Korematsu’s case, the Court accepted the U.S. military’s argument that the loyalties of some Japanese Americans resided not with the United States but with their ancestral country, and that because separating “the disloyal from the loyal” was a logistical impossibility, the internment order had to apply to all Japanese Americans within the restricted area. Balancing the country’s stake in the war and national security against the “suspect” curtailment of the rights of a particular racial group, the Court decided that the nation’s security concerns outweighed the Constitution’s promise of equal rights.

Justice Robert Jackson issued a vociferous, yet nuanced, dissent. “Korematsu … has been convicted of an act not commonly thought a crime,” he wrote. “It consists merely of being present in the state whereof he is a citizen, near the place where he was born, and where all his life he has lived.” The nation’s wartime security concerns, he contended, were not adequate to strip Korematsu and the other internees of their constitutionally protected civil rights.

In the second half of his dissent, however, Jackson admitted that ultimately, in times of war, the military would likely maintain the power to arrest citizens — and that, possessing no executive power, there was little the judicial branch could do to stop it. Nonetheless, he resisted the Court’s compliance in lending the weight of its institutional authority to justify the military’s actions, and contended that the majority decision struck a “far more subtle blow to liberty” than did the order itself: “A military order, however unconstitutional, is not apt to last longer than the military emergency. … But once a judicial opinion rationalizes such an order to show that it conforms to the Constitution, or rather rationalizes the Constitution to show that the Constitution sanctions such an order, the Court for all of time has validated the principle of racial discrimination. … The principle then lies about like a loaded weapon ready for the hand of any authority that can bring forward a plausible claim of urgent need.”

Justice Owen Roberts also dissented in the case, arguing that a relocation center “was a euphemism for prison,” and that faced with this consequence Korematsu “did nothing.” Also dissenting, Justice Frank Murphy harshly criticized both the majority and the military order, writing that the internment of the Japanese was based upon “the disinformation, half-truths and insinuations that for years have been directed against Japanese Americans by people with racial and economic prejudices.”

The Court’s decision in Korematsu, loudly criticized by many civil libertarians at the time and generally condemned by historians ever since, has never been explicitly overturned. However, a report issued by Congress in 1983 declared that the decision had been “overruled in the court of history.” [PBS.org]

[In the 1980’s] Korematsu returned to court to challenge the original court decision. Irrefutable evidence was discovered that top government officials knew and covered up significant government intelligence information that Japanese Americans had not actually posed a threat to national security. His 1944 conviction was overturned. The decision eventually propelled the Internment Redress movement to success.

The “One Man Seeks Justice” story addresses these issues in the wake of September 11, 2001, and the racial and religious profiling against Muslims, Arabs and South Asians that ensued. Fred Korematsu’s story challenges readers to remain vigilant against civil liberties violations even in times of war or national crisis. [AdvancingJustice-LA.org]