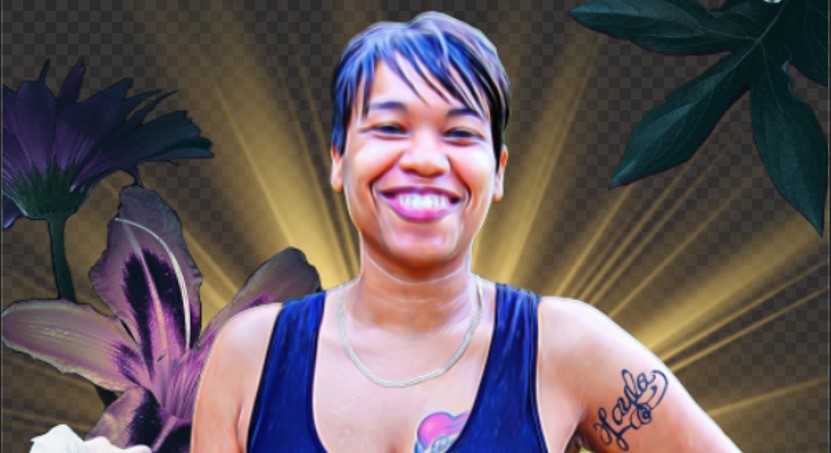 Playing house is different with baby
cousins, lil’ brothers and sisters and the
mannish boys in the neighborhood. Who needs
a fake baby with real baby cousins
in reach? Tish was a chubby, curly-haired
infant, rosy-cheeked girly-girl toddler
adorable, rambunctious, loved. Rolling
over, pushing up learning to walk, run
circles around folks from the house and yard
to Grandma’s vegetable garden; real life
cabbage patch doll blooming up and down the
street, burrowing roots, extending networks.

Too soon, I was no fun; just a boring
old cousin to a womanish girl who
preferred smokin’ weed as boys circled and
plotted in her haze. Though she grew up fast,
she was no fast-tail-gal. She met her love,
married young in paradise. Soon after,
my play baby was having babies in
wedded bliss. A homemaker happiest
making a home in the warm embrace of
family, next door to her mama, ‘cross
town from Grandma. A nurturing space for
herself, her husband and their one two three
four five bouncing bundles of joy. Later
expanding her shelter to make room to
comfort Grandma in her declining years.

A lifetime came and went. A final stealth
pregnancy shared with few. Heard in passing
near her due date. Her mom, my aunt, kept her
confidence; our uncle not so. She was
due on my long-deceased brother’s birthday.
A happy coincidence to be sure.
On December 16, my aunt called to
check on me. She asked, “Have you gotten your
diabetes under control?” “I thought
I did, but last week I spiked,” I replied.
On and on I rambled, before Cousin
Tish interrupted, “Should I let them give
Grandma the Covid-19 vaccine?” “No,”
my aunt said. “What do you think,” she asked me.
“No,” I agreed, “they don’t know what the side
effects are.” “Yeah,” my aunt said, “Mom has too
many illnesses and is taking too
many medications, that vaccine could
kill her. “Ok,” said the woman who was
once upon a time my play baby, as
she made arrangements for the grandmother
she was now mothering. Generations
are mere stair steps grape-vining across blurred
lines. We could’ve all been in the same room,
sharing the same space in momentary
unity. A rare consensus. Eighteen
hundred miles, forty years separated
us from oldest to youngest to farthest
away. “I have to go,” said Auntie. “Tish
needs to get ready for the hospital.
They’re inducing her tonight.”
“Goodness! How does she do it all,” I asked.
“What do you mean?” Intoned with a raised brow.
“She’s about to deliver her sixth child.
She’s on her feet to the end, taking care
of grandma, five kids and a husband. It’s
a lot.” With a quiet sense of affront,
my aunt said, “I help.” Indeed, she does, though
not immediately apparent from
eighteen hundred miles away. As neighbors,
mother and daughter have separate but
shared households. They see each other daily.
Tish stays home, her mom works. They share the days
and divide the responsibilities.
Mini-compound in an old industry
town. How can any of us do it all
without help? “Ok, talk to you later.
Good luck to Tish.” When was the last time I
told her I love her? She’s kept me at a
distance for decades; I stopped trying to
bridge it long ago. What would I have said
had I known it was my last chance to speak
to her through her mom? The next morning, her
brother called to say this vibrant woman
died in childbirth. Unbelievable, yet
true. That was not the call any of us
expected to receive. From good luck to
my God, may she rest in peace! We know she
held her blessings close in a well-lived life.

Of the ways we thought any of us would
go next, the ones we were “ready” for, Tish
dying giving birth was not a concern.

Gone. Thirty-eight years young. Healthy. Happy.
Living, loving fully. Present for life.
Woman, wife, mother, daughter, granddaughter,
sister, niece, cousin, friend. Being herself
was her favorite role. “I Am Woman.
I Am Me,” she shared with me when asked what
womanhood meant to her during my last
visit. “Everything about Woman
represents Me. Determination. Me
being focused. Being respectful and
making sure my children are respectful.
Having manners. Succeeding in life.” She
Will be remembered as my play baby
and a bonafide mommy-woman. She
leaves behind many impressed by all the
life in her years, her love of motherhood
all encompassing. For the little ones,
Tish’s babies, overwhelming sadness
for the void her physical absence leaves
in their lives. May God enrich their spirits
to receive all the comfort, guidance and
love they need to fill their years with good life.
Precious Layla, Erick, Karess, Remy,
Daymanie and dearest London whose first
breath struggled pass her mother’s last. As I
mourn Cousin Tish, I ache for the husband
she shared her life with, mother never more
than a hop away, father whose pride was
his first-born, and brother who could’ve been
her Siamese twin. Then there’s Grandma, who
has been sustained by Tish’s care and grace.