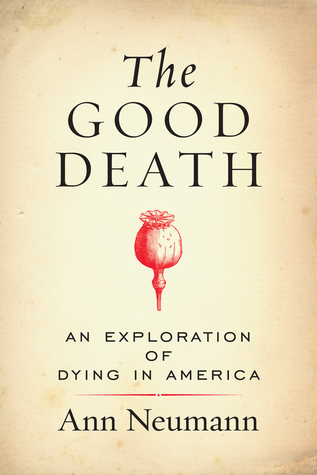 The Good Death: An Exploration of Dying in America by Ann Neumann

The Good Death: An Exploration of Dying in America by Ann Neumann

One of the first phrases to stand out to me was part of a story Ann Neumann shared of a terminal man in the Midwest. He thought it was important to “participate in our own death.” (p 69)

There was a very strong sense that Ann Neumann was directing her words and somewhat undercover activism to a very distinct audience. Her audience was very much so white middle class, middle aged women. There were several times in the text when my neck snapped back in affront as if she assumed anyone outside of her preferred audience would have no interest in or understanding of a good death.

This was a book I was looking forward to reading when it was shared as the next selection for my book club. I read the first couple of chapters with great interest and anticipation. Somewhere approaching the center of the book, she got off topic or changed strategies that took away a great deal from the reading experience. By the end, I felt it was a fruitless book with a misleading title and subtitle.

One of the main things that was off-putting was the author’s off-handed handling of medical ethics. Neumann lost credibility with me on page 93 when she wrote one line on the Tuskegee Airmen experiments, which involved more than 600 black men, as being “observed but not treated for syphilis” when doctors knowingly misdiagnosed, lied and refused to treat the disease… and most likely gave the disease to those who did not have it. All because they reportedly wanted to watch the debilitating effects the disease has on black bodies as well as document their deaths from it. Neumann later spent twenty full pages on one woman in a coma. She exhausted the medical and personal ethics involved in keeping one young white woman on life support who may not have even wanted to be on life support had she been able to choose. Then there were the thirty pages she wrote pro-life conferences and how the conservative Christian right is a danger to the “right to die with dignity” movement. These fifty pages were followed by another thirty pages itemizing the online disputes with disabled bloggers who saw the terminally ill’s right to die with dignity as a threat to their own personal safety under the care of medical professionals.

I confess I remain unable to connect these tangents. More so because one of the last personal profiles in the book is of a terminally ill imprisoned Latino man who was either a dreamer or a braggart. Neumann was disgusted by him and didn’t understand why he would share elaborate stories with her about his former life or his supposedly non-existent future. She actually wrote how she had no compassion for him and his situation. Yet she began the book writing about being a hospice volunteer to better understand the process of dying.

How is Neumann an authority on death? She concluded, “There is no good death, I now know…. But there is a good enough death…. knowing death makes facing it bearable…. And there is really one kind of bad death, characterized by the same bad facts: pain, denial, prolongation, loneliness.” (p210)

I stalled on the last chapter for a couple of weeks. I ended up finishing it while on vacation during a day trip to Tombstone, AZ. It proved to be a good fit with the Tombstone aesthetic. Ann Neumann’s writing is reminiscent of Tombstone, a town that celebrates death and killing from a bygone age. The town’s tourism thrives on ghost stories, hauntings and remembering the wild viciousness of lawless times. Neumann celebrates the privilege of white middle-class, middle-aged Americans. She goes on a grotesque exploration of what she thinks are horror stories in bioethics and medical morality while exhibiting no curiosity or compunction whatsoever for atrocities against humanity on mass scales.