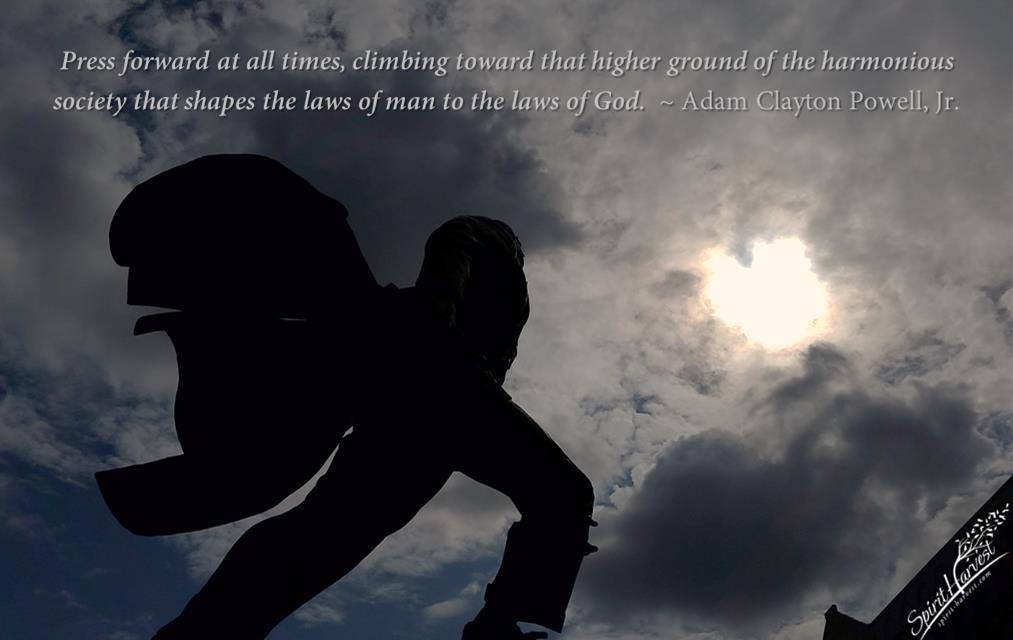 The Day of the Lord

Blow a trumpet in Zion;
sound an alarm on my holy mountain!
Let all the inhabitants of the land tremble,
for the day of the Lord is coming; it is near,
a day of darkness and gloom,
a day of clouds and thick darkness!
Like blackness there is spread upon the mountains
a great and powerful people;
their like has never been before,
nor will be again after them
through the years of all generations.

Their appearance is like the appearance of horses,
and like war horses they run.
As with the rumbling of chariots,
they leap on the tops of the mountains,
like the crackling of a flame of fire
devouring the stubble,
like a powerful army
drawn up for battle.

Before them peoples are in anguish;
all faces grow pale.
Like warriors they charge;
like soldiers they scale the wall.
They march each on his way;
they do not swerve from their paths.
They do not jostle one another;
each marches in his path;
they burst through the weapons
and are not halted.
They leap upon the city,
they run upon the walls,
they climb up into the houses,
they enter through the windows like a thief.

The earth quakes before them;
the heavens tremble.
The sun and the moon are darkened,
and the stars withdraw their shining.
The Lord utters his voice
before his army,
for his camp is exceedingly great;
he who executes his word is powerful.
For the day of the Lord is great and very awesome;
who can endure it?

Return to the Lord

“Yet even now,” declares the Lord,
“return to me with all your heart,
with fasting, with weeping, and with mourning;
and rend your hearts and not your garments.”
Return to the Lord your God,
for he is gracious and merciful,
slow to anger, and abounding in steadfast love;
and he relents over disaster.
Who knows whether he will not turn and relent,
and leave a blessing behind him,
a grain offering and a drink offering
for the Lord your God?

Blow the trumpet in Zion;
consecrate a fast;
call a solemn assembly;
gather the people.
Consecrate the congregation;
assemble the elders;
gather the children,
even nursing infants.
Let the bridegroom leave his room,
and the bride her chamber.

Between the vestibule and the altar
let the priests, the ministers of the Lord, weep
and say, “Spare your people, O Lord,
and make not your heritage a reproach,
a byword among the nations.[a]
Why should they say among the peoples,
‘Where is their God?’”

The Lord Had Pity

Then the Lord became jealous for his land
and had pity on his people.
The Lord answered and said to his people,
“Behold, I am sending to you
grain, wine, and oil,
and you will be satisfied;
and I will no more make you
a reproach among the nations.

“I will remove the northerner far from you,
and drive him into a parched and desolate land,
his vanguard[b] into the eastern sea,
and his rear guard[c] into the western sea;
the stench and foul smell of him will rise,
for he has done great things.

“Fear not, O land;
be glad and rejoice,
for the Lord has done great things!
Fear not, you beasts of the field,
for the pastures of the wilderness are green;
the tree bears its fruit;
the fig tree and vine give their full yield.

“Be glad, O children of Zion,
and rejoice in the Lord your God,
for he has given the early rain for your vindication;
he has poured down for you abundant rain,
the early and the latter rain, as before.

“The threshing floors shall be full of grain;
the vats shall overflow with wine and oil.
I will restore[d] to you the years
that the swarming locust has eaten,
the hopper, the destroyer, and the cutter,
my great army, which I sent among you.

The Lord Will Pour Out His Spirit

“And I will show wonders in the heavens and on the earth, blood and fire and columns of smoke. The sun shall be turned to darkness, and the moon to blood, before the great and awesome day of the Lord comes. And it shall come to pass that everyone who calls on the name of the Lord shall be saved. For in Mount Zion and in Jerusalem there shall be those who escape, as the Lord has said, and among the survivors shall be those whom the Lord calls.